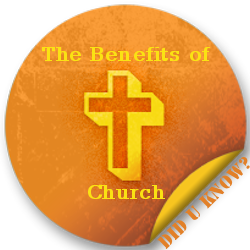 When we opperate our lives according to God's Word then we become more functional & fruitful while becoming less dysfunctional and less spiritually barren. God's Word encourages us in Hebrews 10:25 to "Let us not give up meeting together, as some are in the habit of doing, but let us encourage one another - and all the more as you see the Day approaching." In other words, "Go to church!"

Ongoing studies by Dr. Pat Fagan* have revealed the ASTOUNDING benefits that come from regular church attendance. This is no small matter. Below are the lists of ways that regular church attendance both benefits us and protects us as we navigate through this great adventure called life.
(*Dr. Fagan is the director of the Center for Research on Marriage and Religion and Senior Fellow at the Marriage and Religion Research Institute in Washington, D.C.)
"No other dimension of life in America does more to promote the well-being and soundness of the nation's civil society than citizens' regular attendance at church."
- Dr. Pat Fagan
"Strong and repeated evidence indicates that the regular practice of religion has beneficial effects in nearly every aspect of social concern and policy. This evidence shows that religious practice protects against social disorder and dysfunction."
- Dr. Pat Fagan

I could also add many more reasons to go to church such as increased spiritual growth, encouragement that comes through corporate worship, mission trip & ministry outreach opportunities, incredibly fun planned events like camps and road trips, lifelong deep friendships, the potential of meeting your future spouse, free Bible & education classes, free addiction recovery classes, free marriage classes, inspiration, more effective ministry as the entire Body of Christ works together, and on and on.

Obviously the church is made up of imperfect people at different stages of their personal journey with Christ so there is always the potential for the downsides that come with any community. But if we realize that ahead of time and we don't let that discourage us from obeying God by going to church then the blessings that flow will profoundly impact your life and the lives around you. Just make sure you find a church that doesn't compromise the Word of God... then GO... and GO regularly. Just knowing about a good church doesn't enable you to experience the blessings that can only come through GOING TO CHURCH. You may have a few reasons not to go to church, but God just gave you over 45 great reasons to GO.

"Contrary to the popular image of Hollywood parents who encourage their children to be agnostic or atheist, parents who want their children to achieve will get them into church."
- Rob Kerby (writer of the article below)
ARTICLE
Church kids less likely to divorce or live in poverty
posted by Rob Kerby, Senior Editor [http://www.beliefnet.com/]
Kids who attend church are far less likely to get divorced later in life, have better skills to overcome poverty and do better in college than kids who did not attend church.
In new study, Dr. Pat Fagan compiles independent findings by more than 100 social scientists who have published their own studies over the last two decades establishing the amazing effect that attending church has on kids' lives.
Such findings point a clear path for America, says Dr. Fagan. "When policymakers consider America's grave social problems, including violent crime and rising illegitimacy, substance abuse, and welfare dependency, they should heed the findings in the professional literature of the social sciences on the positive consequences that flow" from faithful church attendance.
Dr. Fagan is the director of the Center for Research on Marriage and Religion and Senior Fellow at the Marriage and Religion Research Institute in Washington, D.C.
He says there is ample evidence that the strength of the family unit is intertwined with involvement with a local congregation. Churchgoers are less likely to be divorced or single and more likely to manifest high levels of satisfaction in marriage.
Regular church attendance is particularly instrumental in helping young people to escape the poverty of inner-city life.
"Religious belief and practice contribute substantially to the formation of personal moral criteria and sound moral judgment," he says. "Regular religious practice generally inoculates individuals against a host of social problems, including suicide, drug abuse, out-of-wedlock births, crime, and divorce.
"Over the last decade," he writes, "research on the effects of religious practice has expanded. It now encompasses such areas as health, overcoming addictions, reducing crime, and reforming criminals."
However, he draws attention to the impact that church attendance and the practice of sincere faith has on good grades and success at school.
"For public policy, one of the most important potential effects of religious practice is educational attainment," he writes. "For some time, a small but growing body of research has consistently indicated that the frequency of religious practice is directly and significantly correlated with academic outcomes and educational attainment."
Also important is involvement in church youth groups.
"Social life that includes or is built around church functions," writes Dr. Fagan. "Children's involvement in church activities are strong predictors of academic achievement as well. Children who have greater religious socialization also have increased levels of educational attainment," according to Diane R. Brown and Lawrence E. Gary in their article "Religious Socialization and Educational Attainment among African Americans: An Empirical Assessment," published in 1991 in The Journal of Negro Education.
Furthermore, reports Dr. Fagan, "those who become more religiously involved during their high school years increase their academic ranking." That finding was made by Glen H. Elder, Jr.and Rand D. Conger, in their book Children of the Land: Adversity and Success in Rural America, published by the University of Chicago Press in 2000. In that same book, "a study of Iowa families," writes Dr. Fagan, "discovered that youth who in eighth grade are religiously involved will have higher academic competence in the twelfth grade."
Christian Smith, director of the National Study of Youth and Religion and Professor of Sociology at Notre Dame Univeristy, drawing on work done by Chandra Muller, Christopher G. Ellison and Mark D. Regnerus, who noted that the influence of church attendance and favorable perceptions of religion result in "positive school attitudes" which are evident from childhood, through late adolescence and into college.

Dr. Fagan goes on to cite more than 100 other such research papers, articles and books that reported, among other things, that:

Frequent religious attendance tends to increase students' total years of schooling. Students who attend church weekly while growing up have significantly more years of total schooling by their early 30s than peers who do not attend church at all.

Religious practice seems to benefit the education of the poor even more than it does that of advantaged children. An analysis of the National Longitudinal Study of Adolescent Health found that church attendance strengthens educational progress among children in high-poverty neighborhoods.

For the poor, the positive effect of religious practice is significant because it is one of the few robust positive influences in their lives. As the level of poverty rises within the neighborhood, the relationship between church attendance and being on-track in school becomes more positive, indicating what Dr. Fagan calls a "uniquely protective influence of church attendance" among youth in more impoverished neighborhoods when compared with their devout counterparts in more prosperous neighborhoods
"Other studies," writes Dr. Fagan, "confirm religion's beneficial effects on the academic performance of children in urban communities."
William Jeynes, Professor of Education at California State University Long Beach, found that "very religious" high school adolescents from urban communities fared better academically than non-religious adolescents.
The importance of Dr. Fagan's report is that it serves as a valuable guide for parents wanting the best for their children. Contrary to the popular image of Hollywood parents who encourage their children to be agnostic or atheist, parents who want their children to achieve will get them into church.
"Spiritual and religious involvement affects educational outcomes more than income does," wrotes Fagan. "One analysis of tenth grade students found that, for both black and white students, the impact of pro-social values was stronger than the effect of socioeconomic status on reading and math proficiency (44 percent greater for white students and 51 percent greater for black students). That study also showed that holding religious values was associated with higher math scores for black students.

"Religious attendance has a profound effect on children with behavioral risks. One study analyzed the characteristics of those who escape poverty and found that church attendance powerfully reduces socially deviant activity." In other words, going to church reduces a child's likelihood of being a criminal.

Another study that Dr. Fagan cites showed that students attending "weekly religious services were less likely to use drugs or alcohol, to engage in delinquent behavior, to get in trouble at school or to have poor grades when compared with their peers who attended church less than monthly or not at all."
"Youth who considered religion to be fairly important or very important in their lives were less likely to engage in risky behavior. For many of these youth, church attendance reinforces messages about working hard and staying out of trouble, orients youth toward a positive future, and builds a transferable skill-set of commitments and routines."

"Interestingly," reports Dr. Fagan, "Carmel Chiswick, Professor of Economics at the of Illinois at Chicago, found that 'people with high levels of religious human capital tend to select spouses who also have high levels, forming family units for which the home production of religious education is more efficient.'

"Frequent religious attendance is highly correlated with less sexual activity among those who are not married," wrote Dr. Fagan. "Strong and repeated evidence indicates that the regular practice of religion has beneficial effects in nearly every aspect of social concern and policy. This evidence shows that religious practice protects against social disorder and dysfunction.

"Specifically, the available data clearly indicate that religious belief and practice are associated with the following list of benefits:"

Greater educational aspirations and attainment, especially among the poor;

Higher levels of well-being and happiness;

Higher recovery rates from addictions to alcohol or drugs;

Higher rates of charitable donations and volunteering; and

Higher levels of community cohesion and social support for those in need.

Less abuse of alcohol and drugs;

Lower levels of many infectious diseases;

No other dimension of life in America does more to promote the well-being and soundness of the nation's civil society than citizens' regular attendance at church, says Dr. Fagan.

"As George Washington asserted," he concludes, "the success of the republic depends on the practice of religion by its citizens. These findings from 21st century social science support his observation."